Rotary Seniors of the Month 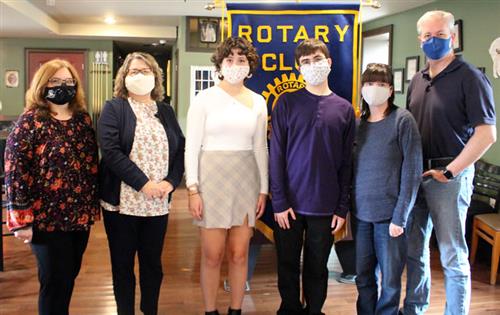 Since second grade, Turner has been a member of each of his school’s teams in the Chester County Envirothon. As a sophomore, he and the Envirothon team members were among several students and club members who planted approximately 450 trees on the school campus, creating a natural barrier to keep pollutants from seeping into Little Elk Creek.

Turner is currently enrolled in AP U.S. History and AP Calculus. He has previously taken AP Math for Economics and AP Environmental Science, scoring 5’s in both exams. He was the first Oxford sophomore to take AP Calculus and scored a 5 on the exam.

After graduation, Turner plans to attend college to study actuarial science. His choices include Lebanon Valley College, the University of Pittsburgh and Arcadia and West Chester universities.

As a junior, Gabriella was named the high school’s recipient of the 2020 Widener University/NBC-10 High School Leadership Award, which recognizes high school students in the Philadelphia region who embody the university’s commitment to develop and inspire leaders to affect positive change. Those who receive the award have been recognized for their ability to demonstrate courage by standing up for what is right, finding a way to address a wrong or making a difference in a significant way.

Gabriella has participated on competitive cheer teams for 14 years, and is in her third year as coach of the Junior 1 team at KX Athletics in West Grove. At KX Athletics, she served as a “buddy” to a special needs cheer student for two years.

At age 16, Gabriella was diagnosed with lymphoma. She underwent four rounds of chemotherapy and on November 1 will mark one year that her cancer has been in remission.

Gabriella is currently undecided about her plans after graduation, but is looking forward to a bright future.